Skin cancer is incredibly prevalent in the United States. In fact, one in five adults will develop a form of skin cancer by the time they turn 70 years old. 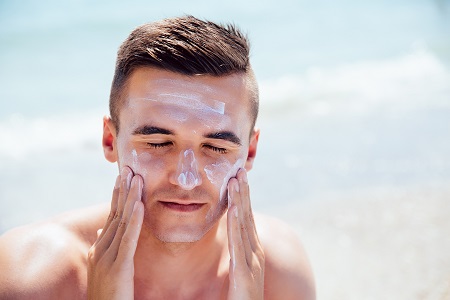 Why is that? One reason could be the differences between men’s skin and women’s skin:

These characteristics of men’s skin may make it more susceptible to sun damage, according to two separate studies. Research has also shown that women’s skin does a more effective job of repairing sun damage than men’s skin.

Basal cell carcinoma is the most common type of skin cancer and occurs in sun-exposed areas like the face and neck and manifests itself as:

Squamous cell carcinoma often appears on sun-exposed areas such as the face, ears or hands and looks like:

Melanoma is a serious affliction. In men, melanoma makes up 5% of all new cancer cases. Be vigilant in looking out for melanoma, as it can appear in areas of the skin that aren’t exposed to the sun. Look for:

Even if you don’t contract skin cancer, sun damage can have other resounding effects on your health, like scarring or early wrinkling of the skin. And regardless of whether or not you’re exhibiting potential symptoms, you should always consult with a medical professional about any changes to your skin that worry you to stay proactive in your prevention.

If your doctor thinks a mark may be cancerous, their first step will likely be to remove the mark. Iowa ENT Center offers a treatment called cryotherapy. Sometimes known as cold therapy, this treatment freezes a pre-cancerous spot with liquid nitrogen.

If you’re worried about a suspicious mark on your head or neck, make an appointment with Iowa ENT Center. Call us at 515-223-4368, or fill out our appointment-request form.